THE BASICS OF VINYL REPLAY

Any turntable will work fine, right? Well, Not all of them... See the sketches below. If your turntable has an adjustable counterweight at the rear of the tonearm, and a cueing lever to raise and lower the tonearm, that's a good sign. Some later-vintage 'tables will have the T4P cartridge system, which is a universal system. T4P is still well-engineered, but limits your choice of cartridge. Standard headshells have mounting screws spaced 1/2" apart for attaching the cartridge (pickup). This provides an upgrade path. Beware of cheap, sub-standard department-store turntables, as these can mis-track and damage your records. 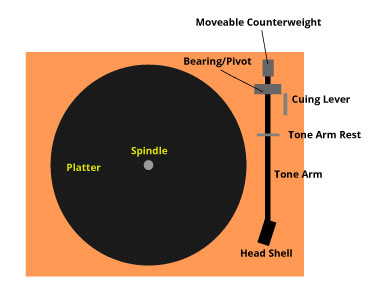 If you are just getting into vinyl, there are some basic things that every vinylphile should know. One important thing is that just because your turntable can switch speeds between 33-1/3, 45, and 78 RPM does NOT mean you can play all of these records at the same time! Be aware that the old shellac 78 RPM records require a stylus (needle) that is between 2 to 3 mils (thousandths of an inch) thick in order to properly fit the grooves of a 78 without damaging it. If you aren't certain of what kind of stylus you have, find out before playing any records.

The Vinyl LP and the 45 RPM "singles" as we know them today have been around since 1948 with the invention of the Microgroove. Later, stereo recordings came out. Modern microgroove records can fit about 20 min of music per side, vs. only 3 to 4 minutes for a 78. Long-Play (LP) microgroove records accomplish this by using a much smaller stylus of only 0.7 mil (we'll stop calling them needles at this point, ok?) or seven ten-thousandths of an inch, roughly 17 microns. Very tiny indeed... This is why Ultrasonic cleaning is so effective- it works at the micron level and scrubs out all the dirt you could never see with the naked eye. Felt pads, or cloths may make the record appear shiny, but they can push the microscopic dirt deeper into the grooves, which can cause distorted, noisy playback.

NEVER TOUCH THE GROOVES! Handle the record by the outer edges. Even those of us with impeccable hygiene can still leave fingerprints behind. Fingerprints contain dead skin cells (protein), sebum (skin oil), sweat, and a host of other contaminants you can't see... The good news: Pure-Grooves™ can remove all of these contaminants.

Use the Cueing Lever to raise and lower the tonearm on and off the record. Dropping the stylus down "freehand" is an easy way to leave audible "divots" in the soft vinyl. The best thing you can do is give your records Soni-Magic by Pure-GroovesTM and then only use an anti-static record brush to neutralize static and dust them off before and after playing each side. The Stylus should also be cleaned with a stylus brush, very gently, from the back towards the front.

Put the record back in its sleeve right after playing to avoid dust build-up, and store your records upright, on their edges on a bookshelf deep enough to support them. This will prevent warps from occurring. Never store records stacked flat on top of one another.